* I have been training horses and people professionally since 1999, I graduated from Ypäjä Equine College in 2005 (riding instructor) and 2018 (master instructor)
* I did my practical training within riding instructor studies with Kyra Kyrklund (World Championship silver medalist 1990, Winner of the World Cup Finals 1991, six time Olympian, team coach of Sweden…) and Richard White at their Snowhill Farm in the UK in 2005

* I worked as a riding instructor in Finland 2005-2008
* I have been a freelance-trainer-rider since 2007
* I am the author of the book called “Perusratsastus” (Basic Riding, 2007 / 2014)
* living and working in Germany 2012-2017
* Within the years I have worked with several trainers, to name the most influential: Arto-Pekka Heino, Kirsi Hagner, Kyra Kyrklund , Richard White, Heidi Svanborg- Lodman… Currently I’m trained by the very skilled Janne Bergh.
* I have competed on national and international level in dressage, up to S classes
* I have trained and competed in show jumping on the 100-110 cm level, started also in eventing

I never planned to do horses as a career, it just happened.

I sat on a horse the first time when I was 5 years old, apparently. My three years older sister got soon quite enthusiastic about horses and I followed her to the stables. Horses at that time frightened me quite a lot, but also fascinated and I kept on going to the stables time after time. My first beginner’s course I had to take twise as I spent too much time on the ground instead of the saddle.

After some 5 years of riding on weekly riding school lessons my mother, who had just started to ride herself, decided that we could buy our own horse. It was not the most recommendable purchase as a first horse – a thoroughbred racing horse, who had just finished her career in Poland. Danisza xx taught me and my sister the basics of riding and a lot of patience. My sister reached with her placings on 110 cm national jumping courses, I rode to ribbons in every single start on our last season together on Novice level. After that season it was time to change into a bigger and younger horse. Heloisa was a strongminded mare, who had a heart of a true showjumper. She taught me to handle horses with a consistent manner to reach results. Unfortunately a small and harmless looking injury ended her career and after nearly ten years of owning a horse I was without my own mount.

I managed to stay one month out of the saddle. I realized it was not for me, so I started to ride horses of other people and give more lessons. Soon I noticed that I spent more time at the stables around the region than at school studying business and decided to apply to the Ypäjä Equine College. I got in and studied my riding instructor’s degree, graduating in 2005 with good grades (5/5 from dressage and 4/5 from jumping). Within my studies I had the immense honour to do my practical training of 6 months at Kyra Kyrklund’s and Richard White’s Snowhill Farm in the UK. This time spent there changed my life. If it wouldn’t have been this fantastic learning opportunity, I think I would have changed the course of my career at some point. The logical, clear system of training horses Kyra and Richard are using is ground breaking. There is no force, there is no excess stress. Horses are trained humanely and still they reach the levels. Rider’s body is the tool to achieve this. It is limited how much one can learn and absorb within 6 months, but I have to say I still refer to the notes I made in 2005. It was the perfect “high school” of riding, which gave the basis for future learning.

During my studies I bought my third own horse from Germany with a bank loan. Ravenna was with me until she had to be put down after an illness in the age of 16 years. She was the best teacher one could hope for. All the things I teach I have put into test with her. She has brought me some fantastic experiences during the years.

I spent a few years working in riding schools and decided then to return to my roots and start my own training business. Since 2007 my main occupation has been trainer and rider. I have in training between 20-40 horse and rider combinations all the time. I lived in Germany the years 2012-2017 and worked both around Munich and in Finland. At the moment I train riders in Finland (Oulu, Rovaniemi) and more seldom in Munich area.

In 2007 I wrote a book called “Perusratsastus” (Basic riding). It became a success and two copies were sold out by the end of 2012. In 2013-2014 I went through the whole contents, wrote it partly again, added a lot of new information in and updated the illustration. The renewed copy was published in April 2014. 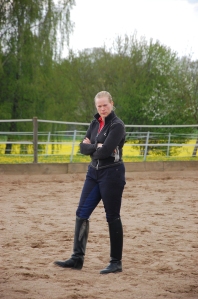 The journey from the first rounds of walk up to today has been a rocky climb, but definitely worth it.